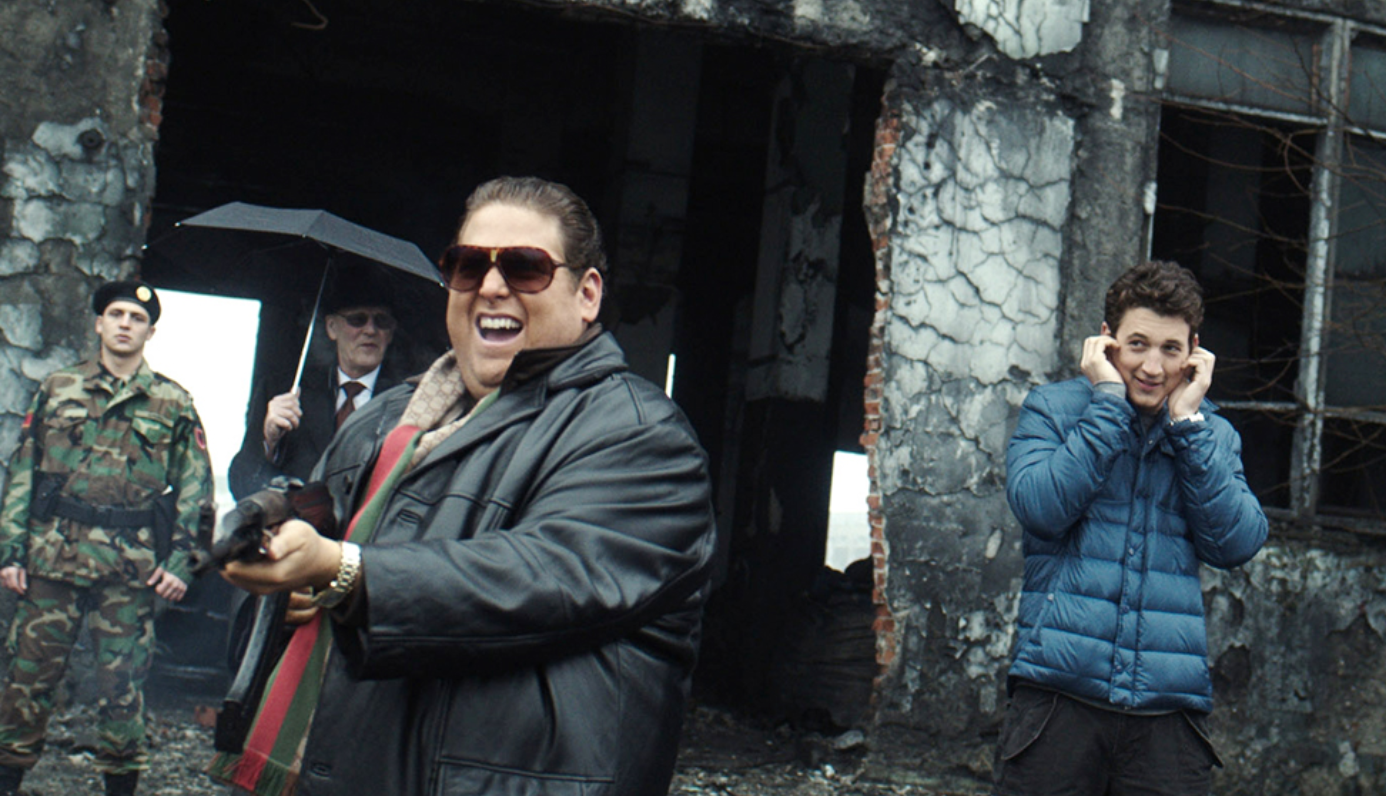 “Cry Havoc, and let slip the dogs of war”

What it’s about: When War Dogs (2016) opens, David Packouz is a young man trying to make a living as a massage therapist in Miami, Florida. He’s living a mundane life with his girlfriend Isabel — Iz for short — when he gets the idea to supplement his income by selling high-quality bed sheets to retirement homes.

That venture turns out to be a complete bust, and just when David is at his lowest ebb, emotionally and financially, he runs into a childhood friend, Efraim Divaroli, at a funeral of all places. Turns out Efraim has been dealing in military weaponry and offers David a partnership.

Trolling the US government’s public website for hours on end, the pair starts with the kind of small contracts that only the bottom feeders like them would find profitable. It’s only when they land a $300 million deal to deliver a truckload of Italian Baretta rifles to the heart of the Iraqi war zone that they discover the true shadiness of the military underworld and how their lives will change forever.

From Baghdad to Albania, with trips to Las Vegas and the Pentagon in between, War Dogs is a rollercoaster ride of a movie that gives you a look at war that I guarantee you haven’t seen elsewhere.

Why I liked it: I really enjoyed watching an aspect of war that happens under the table, something that we all suspect happens but never gets talked about. It was interesting to see David, an innocent person initially, be corrupted by the lucrativeness that the lifestyle had to offer, but in the end just fight so hard to leave the life, retrieve what mattered to him and stay true to the simple life he had wanted all along.

Why you should see it: Have you ever seen that old SNL parody commercial for Shimmer, the fake product that’s supposedly a dessert topping AND a floor wax? Well, War Dogs reminds me a little of that — in the best way possible — because it’s really seven movies, all rolled into one unforgettable film.

Don’t believe me? Let’s count them:

1. War Dogs is a war movie!
You won’t find more gripping, more realistic war footage than the scenes where Efraim and David load their shipment of Barettas onto a rickety Jordanian truck and drive through the desert, bribing their way through checkpoints and chased by insurgents, to deliver their cargo to the Green Zone in Baghdad. Once on the US base, the scene where dozens of pallets, all stacked high with US currency, isn’t something you see every day.

2. War Dogs is a thriller!
What did Bradley Cooper’s mysterious international arms dealer character, Henry, know about the munitions deal in Albania and when did he know it? Were the AEY boys set up in Las Vegas or could the deal have worked out if Efraim hadn’t gotten greedy? And what the hell happened to Bashkim, David’s faithful driver?

3. War Dogs is a true story!
Maybe the most amazing thing of all about War Dogs is that it actually happened and Efraim Divaroli and David Packauz really exist. And as if their real-life experiences weren’t wild enough, War Dogs co-screenwriter Stephen Chin added some of his own experiences in Iraq to the script. Oh, and fresh out of prison, here’s what the two are up to today. Whoa!

4. War Dogs is a coming-of-age story!
From masseuse to bed sheet salesman to arms dealer, we root for David Packauz every step of the way. He’s always the good guy just trying to stay afloat in the cesspool. Although the lessons David learns the hard way might be crazier than most people’s, his story of always trying to do the honorable thing for the people he cares about resonates with universal appeal.

5. War Dogs is a comedy!
Face it, the story of two suburban Florida kids as arms dealers just plain sounds funny. And although the story is never played for laughs, Jonah Hill who plays Efraim is especially good at projecting the total absurdity of the story, while Miles Teller as Packauz is more of the straight man. The scene where a stoned Efraim and David stand in an endless Pentagon hallway and learn that they have underbid their nearest competitor by $53 million? A classic.

6. War Dogs is a cautionary tale!
You know the song, “Mothers, Don’t Let Your Babies Grow Up to Be Cowboys”? Pro tip: Don’t let them grow up to be arms dealers who steal from the US Government, get arrested by the FBI and get thrown into prison either!

7. War Dogs is a love story!
David wins the heart of the lovely Iz, exasperates the lovely Iz, loses the trust of the lovely Iz, makes the lovely Iz wonder why she ever married him, loses Iz and his baby daughter, and finally manages to win Iz back — and that’s a subplot! The true love story behind David and Efraim’s bromance pulled hard at my heartstrings, and I predict that after all the action, mystery, laughs and drama, the pure humanity of it will be what you remember most about War Dogs, too.