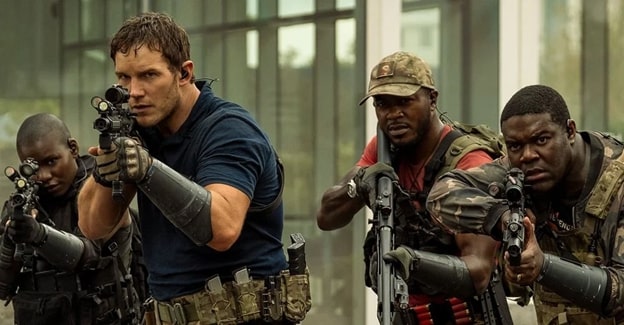 When Amazon Prime’s The Tomorrow War came up on my radar, it beckoned like an oasis to my Covid-parched war movie soul. I mean, what’s not to love about Chris Pratt playing an ex-Green Beret who’s called up to do battle with alien invaders – 30 years in the future?

But just to torture that oasis analogy a little further, my excitement about The Tomorrow War quickly turned out to be a mirage. Between too many confusing plot twists and ho-hum CGI, I couldn’t help but feel that the film could have been so much better.

The Tomorrow War’s original concept was genius and had the potential for a blockbuster movie. Time travelers from the future return to present day earth to deliver a vital message: Three decades from now, mankind is losing a war with alien creatures and future humans will be extinct without assistance from present-day warriors right now.

Got that? So naturally, the world’s governments instantly put aside their differences and band together to enable a worldwide draft because their path is clear: Civilians must go to the future to fight for humanity. The good news? Tours of duty are only seven days long. The bad news? Only 30 percent of the recruits will make it back alive.

Armed with my bowl of popcorn, I was psyched for an action-packed, two-hour slaughter fest, featuring lots of soldiers becoming cannon fodder while just trying to survive their weeklong enlistments. I was expecting lots of shooting and explosions, and for the first hour or so, The Tomorrow War checked all the boxes.

But after Chris Pratt was assigned a new mission after his first engagement, the plot took simultaneous turns for both the generic and the confusing that completely lost me.

Too Generic to Be Memorable

The writers had two choices and sadly, they tried to do both. They could have concentrated their efforts on making The Tomorrow War the best straight-up war-against-aliens movie ever, following in the footsteps of Battle: Los Angeles or Independence Day. Or they could have gone all in on the time travel concept as in The Terminator.

Trying to do both, they ended up doing neither. The end result was a cautionary tale – a muddled movie that although entertaining on the surface, lost its identity and fell short of what could have been one of the best movies in the genre.