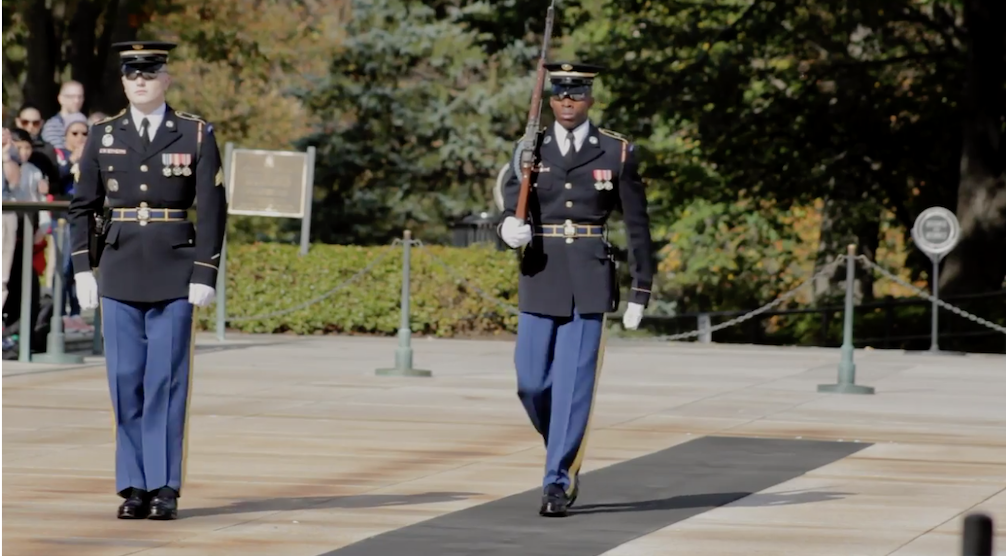 Photo courtesy of U.S. Department of Defense via military.com

Every day is Memorial Day at Arlington National Cemetery in Virginia. Its 624 rolling green acres on the shores of the Potomac are the final resting place for over 400,000 men and women, including 396 Medal of Honor recipients, seven NASA astronauts and two U.S. Presidents.

But nowhere at Arlington is there a more sacred grave than the Tomb of the Unknown Soldier.

As a monument to U.S. service members who gave their lives to defend our country and its freedom, the Tomb of the Unknown Soldier actually contains the unidentified remains of soldiers from World War I, World War II and Korea.

The Tomb originally commemorated an Unknown soldier from Vietnam as well, but after DNA testing positively identified those previously unknown remains as First Lieutenant Michael Blassie of the U.S. Air Force, the inscription over the Vietnam side of the Tomb was changed in 1998 to read “Honoring and Keeping Faith with America’s Missing Servicemen.” 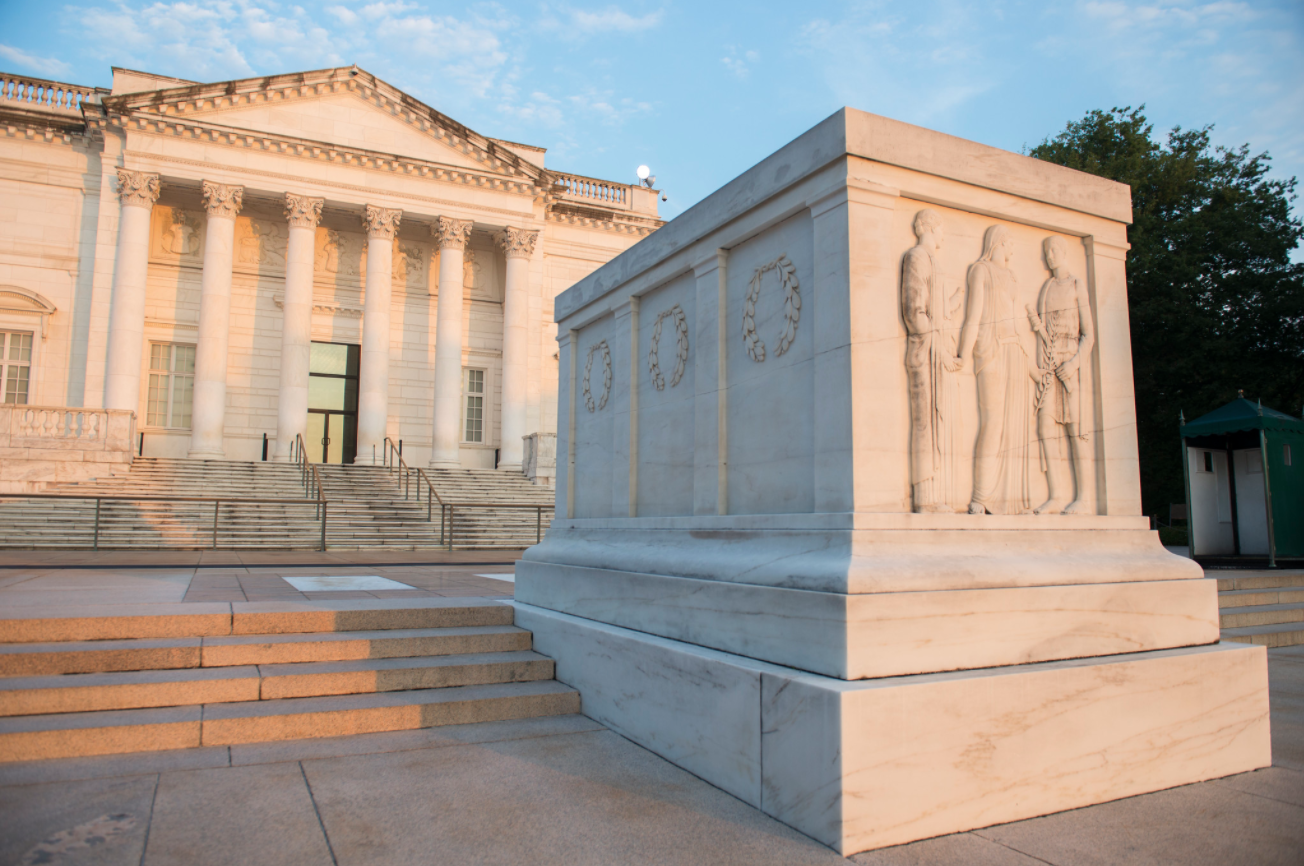 Guardians of the Tomb

Since April 6, 1948, The Tomb of the Unknown Soldier has been guarded 24 hours a day, 365 days a year by specially trained soldiers from the Army’s 3rd Infantry Regiment, known as The Old Guard. Through the dark of night, the darkest days of the Covid-19 pandemic and every imaginable weather condition, the Tomb Guards — known as sentinels — “walk the mat” in front of the Tomb, immaculately dressed in their special uniforms and carrying M14 rifles, which they clean daily.

The Old Guard soldiers do not wear rank insignia, so as never to risk outranking the Unknowns whom they honor and protect. However, they do routinely wear sunglasses because the white marble of the Tomb and its surrounding amphitheater is so blindingly bright. 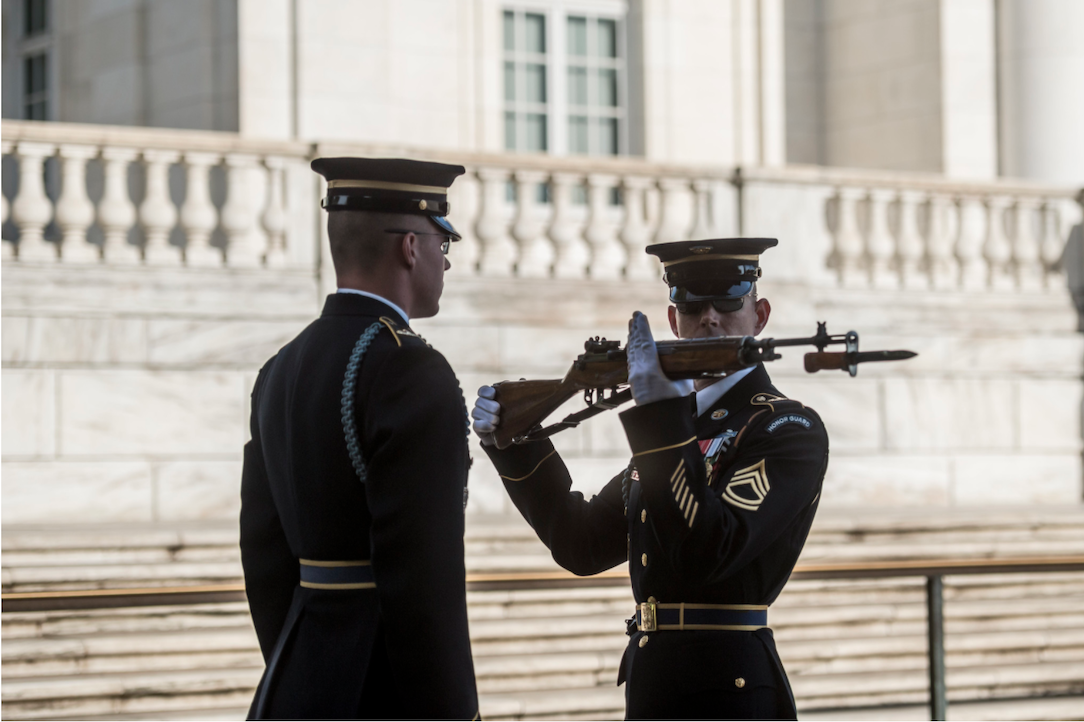 The Changing of the Guard

From April 1st to September 30th, the sentinels conduct a Changing of the Guard ceremony every half hour. During the winter months, from October 1st through March 31st, the ceremony takes place every hour. After the cemetery closes to the public each evening, the guard changes every two hours overnight.

Who are these extraordinary soldiers who volunteer to learn hundreds of facts about Arlington and recite entire speeches from memory?

Who are these devoted men and women who spend hours maintaining their uniforms and shining their shoes so as to march 21 steps in each direction in such a moving and meticulously choreographed show of selfless service and respect?

Meet The Soldiers of the Old Guard

In the video below, you’ll meet some of these very special soldiers and hear directly from them about why they do what they do.

In the words of one, “You’re guarding the unknown soldiers who gave everything. Their parents never got to bury them, [so we’re] out there guarding the Unknowns for those people who never got that satisfaction of burying their loved ones. And I just feel an overwhelming sense of pride to be able to do that.”

Watch Behind the Old Guard in its entirety below:

I hope you have a chance to see the Changing of the Guard in person one day. It’s truly unforgettable.

Meanwhile, here’s wishing you and yours a safe and meaningful Memorial Day!