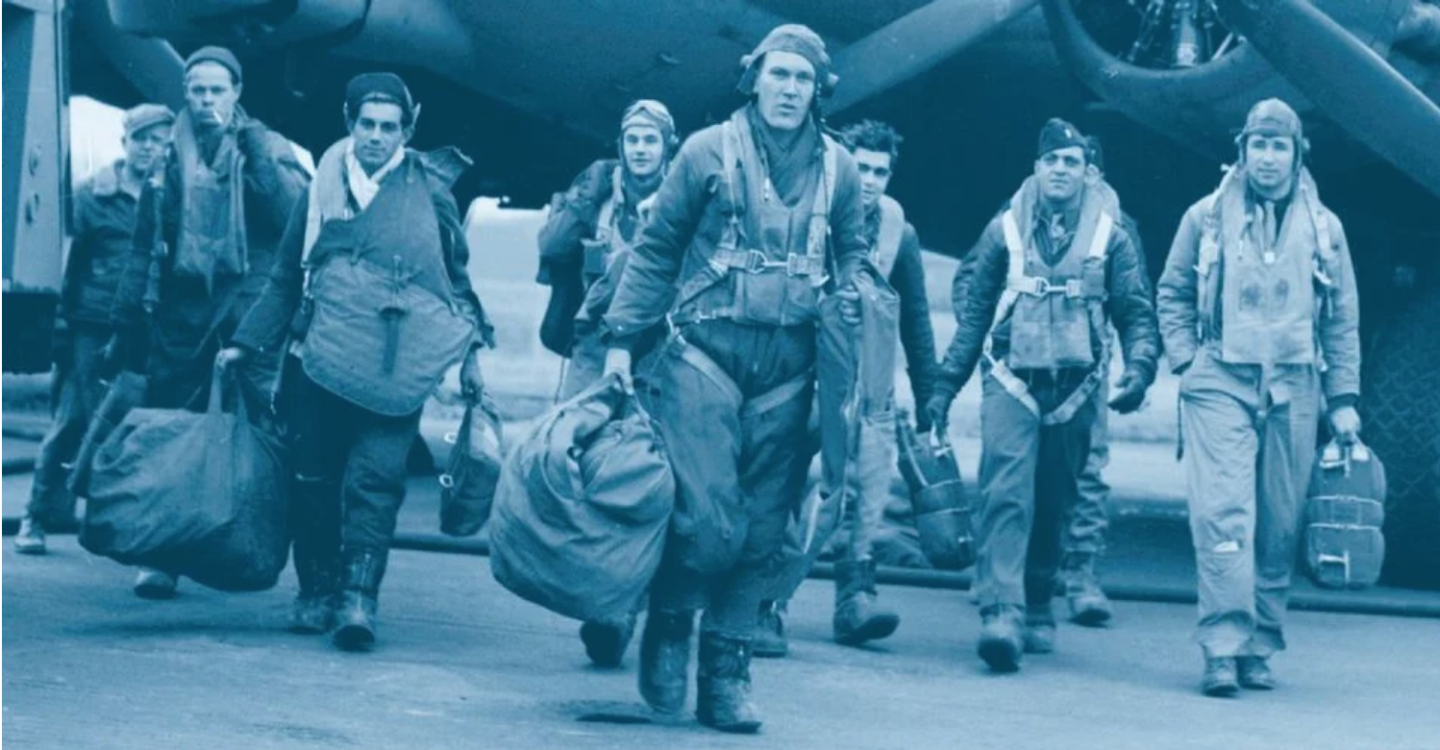 The airmen the Mighty Eighth as seen on the cover of Donald L. Miller’s book, Masters of the Air

Masters of the Air, the long awaited final installment of the epic Steven Spielberg/Tom Hanks WW2 trilogy that brought us Band of Brothers (2001) and The Pacific (2010), has finally begun shooting in England and fans on both sides of the Atlantic are working overtime to ferret out every detail.

In fact, the network of citizen spies devoted to gathering intel regarding locations and casting is giving new meaning to Eisenhower’s reminder to his D-Day troops that “the eyes of the world are upon you.”

Director Cary Fukunaga kicked off a particular frenzy with his late-April Instagram post that filming had started. 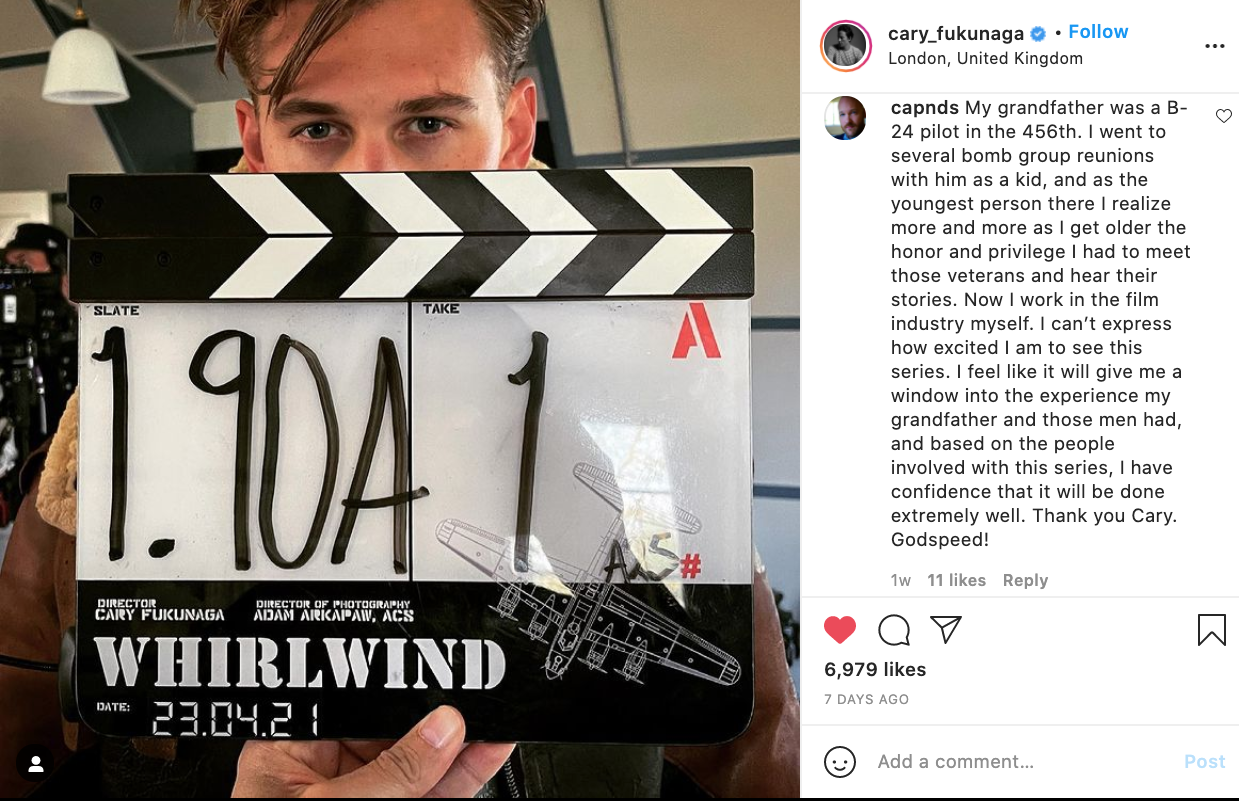 But as you’ll soon see, stealthy superfan reconnaissance had already been taking place for months before the cameras started rolling. Picture the villagers of Pepperinge Eye hunting for Nazis in Bedknobs and Broomsticks — minus the Disney soundtrack — and you won’t be far off.

But first, why is everyone SO excited?

Masters of the Air will be based on a book of the same name by noted WW2 historian, Donald L. Miller. The nine or ten-episode miniseries will follow the Eighth Army Air Force — known as the Mighty Eighth — as it carried out the death-defying strategic bombing raids that brought the war to Hitler’s doorstep to turn the tide against the Nazis in France, the Netherlands and Germany.

Focusing on the legendary exploits of the Mighty Eighth follows the same playbook as Band of Brothers. Spielberg based it on a book (Band of Brothers by Stephen E. Ambrose) and turned the historical spotlight on a storied U.S. Army unit (the 506th Regiment of the 101st Airborne Division, known as Easy Company).

The Pacific used the same template. It was based on two books, With the Old Breed: At Peleliu and Okinawa by Eugene Sledge, who kept his handwritten notes for the eventual book tucked into a Bible during his WW2 service with K Company, 3rd Battalion, 5th Marines, and Helmet for My Pillow: From Parris Island to the Pacific by U.S. Marine Robert Leckie.

Where is Masters of the Air being filmed?

Masters of the Air has been on the drawing board since 2013. But try as Spielberg did to throw the Brits off the scent, his efforts at secrecy were no match for the locals, especially intrepid travel blogger Alastair McKenzie and his network of citizen spies. As early as October 2020, McKenzie had narrowed Masters of the Air’s probable locations down to five possibilities.

By early March of 2021, McKenzie had nailed the location, based on reports from a woman who lived at the edge of Abingdon Airfield in Oxfordshire. Be sure to check out McKenzie’s wonderful blog, Mechtraveller.com for the latest behind-the-scenes updates on locations and filming.

Who has been cast in Masters of the Air?

Not to be outdone by the likes of a solo blogger, Britain’s Daily Mail newspaper has recently gone into high gear to reveal details of Masters of the Air casting and set design, complete with some great photos of some of the stars in costume.

Two of the production’s leads will be Rafferty Law (Jude Law’s son) as Sgt. Ken Lemmons and Austin Butler as Major Gale Cleven. Game of Thrones and Tolkien actor Anthony Boyle will play Major Crosby and Callum Turner, who previously appeared in the BBC’s adaptation of War and Peace will star as Major John Egan. Line of Duty favorite Tommy Jessup will also have a role.

What do we know about production costs?

According to WarBirdNews, Masters of the Air production costs could well exceed $200 million, including the $7 million main airfield set. Check out the Daily Mail’s before and after interactive graphic of the set here.

When will Masters of the Air be on the air?

That’s a good question and the answer is far from clear. After originally being greenlighted by HBO in 2013, a lot has happened since, including, of course, the global Covid-19 pandemic.

Masters of the Air is now an Apple TV+ production and may film at least through 2022. The earliest we can probably expect to see it would be 2023.

So stay tuned here and we’ll do our best to keep you up to date on the very latest!

Meanwhile, enjoy this talk by Masters of the Air author Donald L. Miller: