You don’t have to be a diehard hoops fan to get at least a little excited about the NCAA’s annual men’s and women’s college basketball tournaments known as March Madness.

Especially this year, when teams have been battling Covid lockdowns in addition to their regular opponents, the games have been must-see viewing as the 68-team starting brackets winnowed their way down through the Sweet Sixteen and Elite Eight to the Final Four.

There’s been drama at every turn: Stanford edged out Arizona by one point to capture the women’s crown and the Baylor University Bears trounced the previously undefeated Gonzaga Bulldogs for the men’s championship.

And then … just like that … it was all over ’til next year.

So we figured you were gonna need a backup viewing plan ASAP and our team here at The War Movie Correspondent is ready to give you one, featuring a whole bracket of great war movie recommendations.

It’s our version of War Movie Madness and best of all, it’s even (a little bit) scientific.

We started by choosing our ‘Sweet 16’ — war movies that not only do we love as film buffs but that you as readers of this blog have told us you love, too. Sure, you’ll notice some great ones didn’t make the cut … but that’s what next year is for!

The Sweet 16 war movies we chose, all previously reviewed here on the blog, are:

Next, we paired our Sweet 16 war movies off against each other in eight randomized initial faceoffs.

Then, we looked up each movie’s score on Rotten Tomatoes in two ways: its “Tomatometer” rating by professional critics, and its Audience Score rating tabulated from votes by everyday audience members just like you and me.

Based on the random pairings, we created two bracket charts for our Sweet 16 war movies, one for the Tomatometer critics’ Sweet 16 reviews and another based on the Rotten Tomatoes Audience Score feedback.

For each of our chart pairings, the higher Rotten Tomatoes score in each instance determined which war movie advanced to the next round in each bracket until we were left with two championship contenders in each.

Remarkable Agreement on the Final Four

First, let’s look at the bracket based on ‘Tomatometer’ critics’ votes.

The orange numbers in parentheses below each film show how the critics aggregated by Rotten Tomatoes rated our Sweet 16 films: 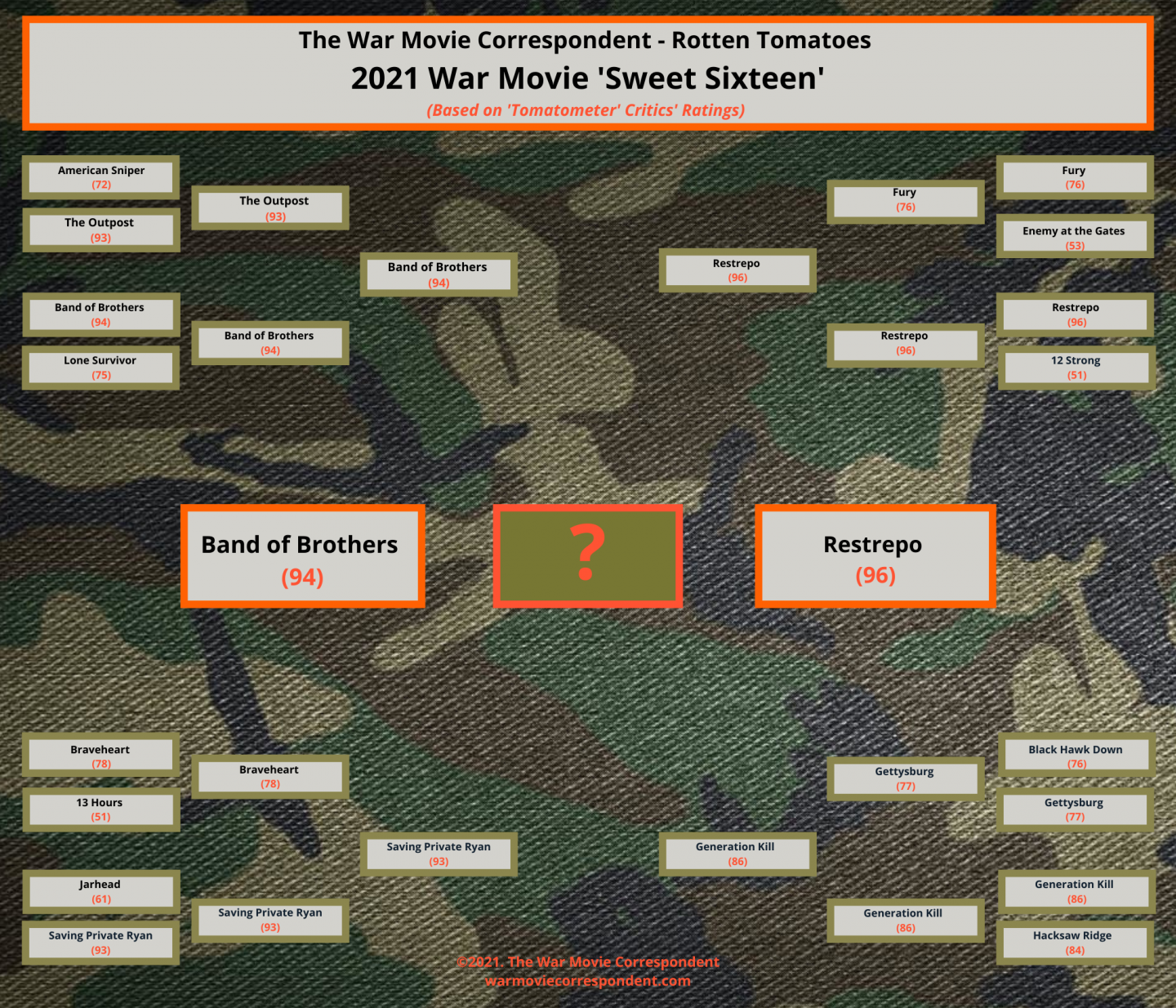 Restrepo, Band of Brothers, Saving Private Ryan and Generation Kill for the Win!

The Final Four according to Rotten Tomatoes critics are Restrepo (96), Band of Brothers (94), Saving Private Ryan (93), and Generation Kill (86).

Now, let’s look at the bracket for the same war movies, based on Audience Score ratings.

Again, the numbers in parentheses below the movie names are the Rotten Tomatoes aggregate Audience Scores. 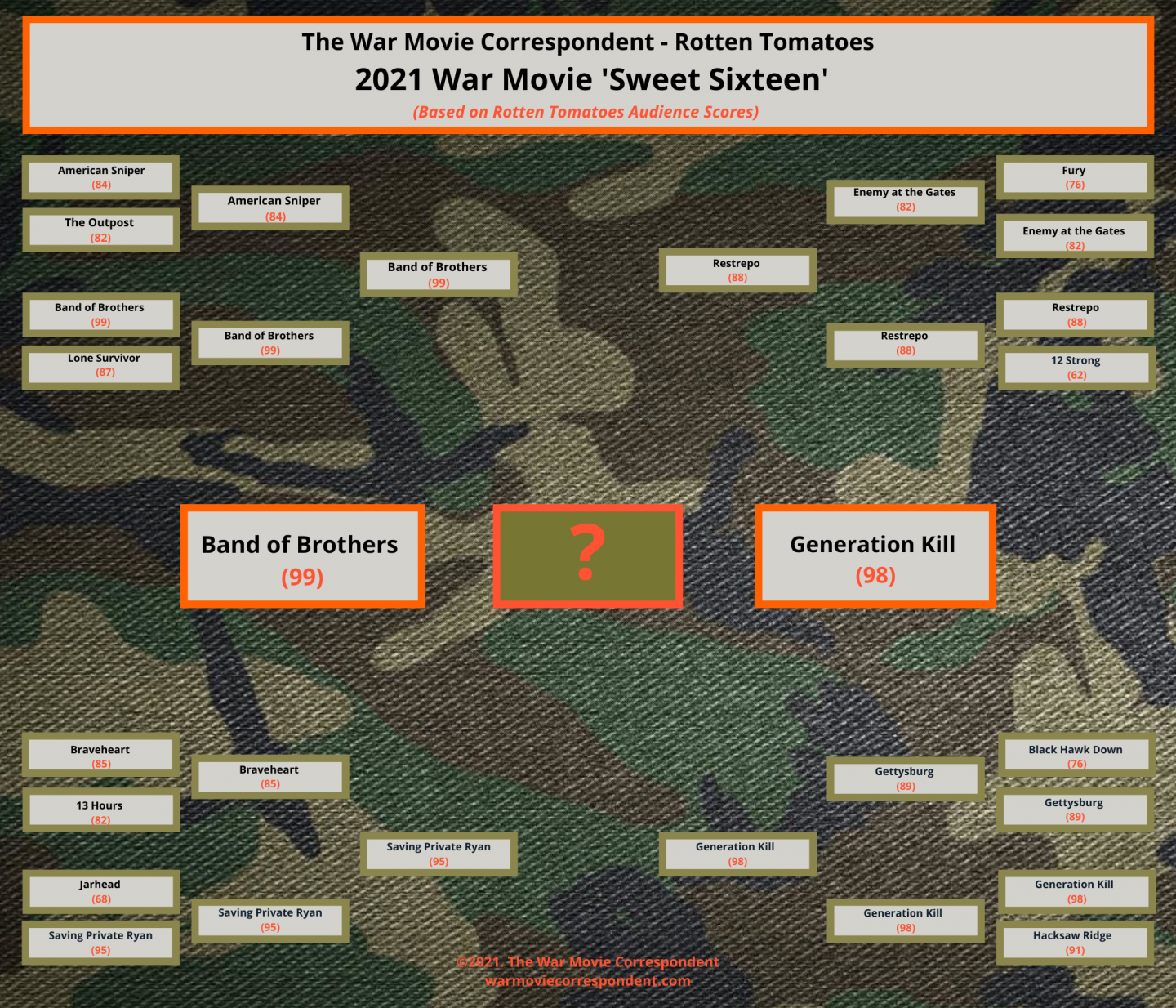 Is Band of Brothers the GOAT?

What’s more, Band of Brothers triumphs again, but this time against Generation Kill instead of Restrepo.

American Sniper and Enemy at the Gates were more popular with audiences than with critics but both were still eliminated early on.

We were surprised that three of our personal favorites, The Outpost, Black Hawk Down and Jarhead, didn’t even make it to the Elite Eight. We were mildly disappointed that Saving Private Ryan didn’t do better and amazed that Gettysburg did so well.

Who’s in YOUR Final Four?

Which war movie ratings surprised you most?

What movies would you include in the Sweet 16 that we didn’t?

And most important of all, how would YOU vote?

Let us know in the comments and happy War Movie Madness in the weeks and months ahead!