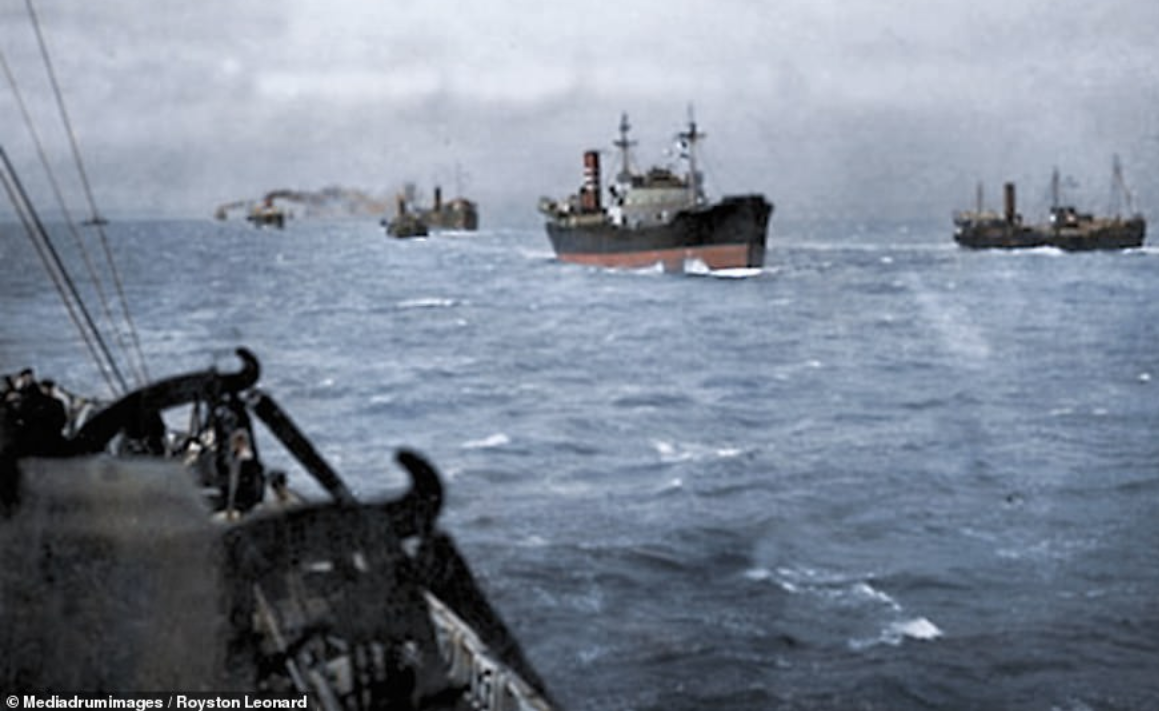 I’ve been looking forward to Greyhound since I first wrote about it as a coming attraction back on March 27th. Little did we know then that the Covid-19 lockdown would mean the film wouldn’t be coming to theaters on June 12th  —  or ever!

I’m pleased to report that I finally got to watch Greyhound this past Friday, thanks to Apple TV+ and the tireless efforts of actor Tom Hanks, who wrote the film, starred in it, and simply couldn’t bear the thought of no one seeing it.

Greyhound Checks All the Boxes

Hanks was right to persist and Greyhound was worth the wait … well, pretty much, anyway.

Don’t get me wrong; Greyhound checks all the obvious war movie boxes. The story pulls the viewer right into the action and ratchets up the intensity nicely.

We learn about a little-known chapter of World War 2 naval history — the merchant marine convoys that supplied England and Russia in the Allies’ fight against Hitler.

And Hanks reprises his patented Everyman character, the quiet leader who steps up to demonstrate great moral fiber and grace under pressure in the face of crisis.

So why did I end up feeling so lukewarm about the film?

I think it’s because the story of Greyhound lacks the triumph-against-all-odds plot stakes that we’ve come to expect from previous Hanks vehicles like Captain Phillips, Apollo 13 and Saving Private Ryan.

Greyhound, based on the 1955 novel, The Good Shepherd by C. S. Forester, tells the story of a U.S. naval convoy in the early days of the war, charged with escorting civilian supply ships safely across the Atlantic to World War 2 England. Hanks plays the fictional hero of the novel, Commander Krause. 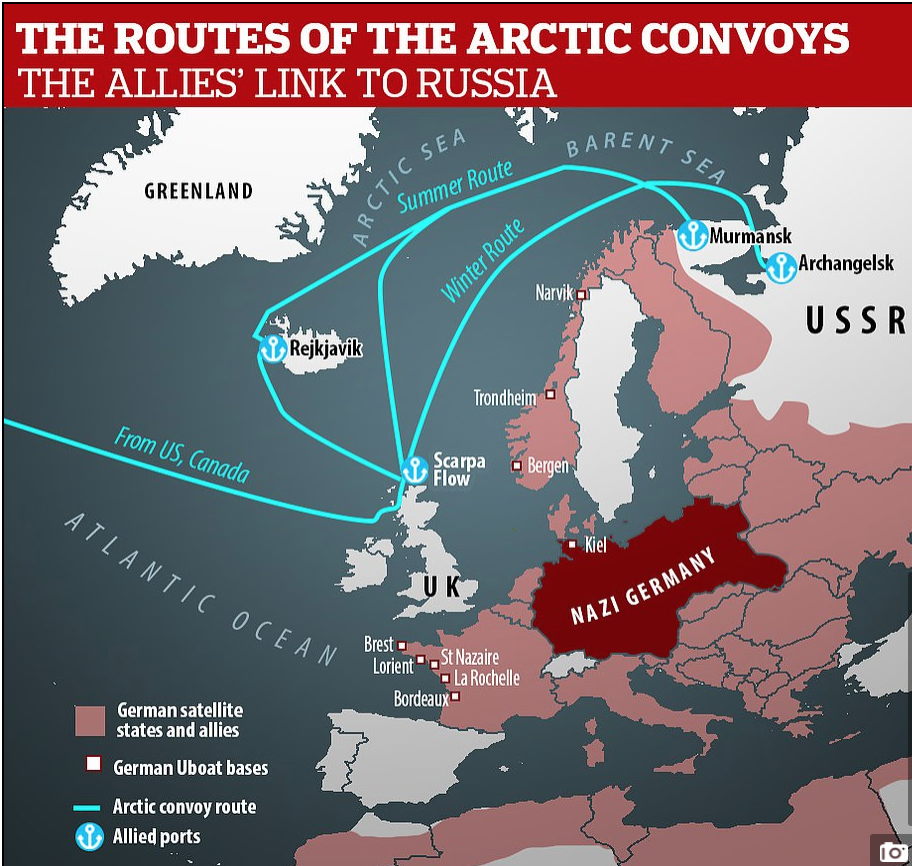 Photo credit: Daily Mail. Over the course of four years, the convoys delivered 7,000 warplanes and 5,000 tanks, as well as ammunition, fuel, food, medicine and other emergency supplies.

In real life, the convoy crossings collectively known as the Battle of the Atlantic were the longest continuous military campaign of World War 2, lasting from 1939 until the defeat of Nazi Germany in 1945.

The merchant marine convoys were undeniably perilous and their naval escorts haven’t gotten their historical due. Over the course of the war, more than 3,500 Allied merchant ships and 175 warships were sunk on the passage to England, while still managing to deliver 7,000 warplanes, 5,000 tanks and untold quantities of ammunition, fuel, food and medicine.

The ships faced special danger because the combat planes of the day lacked the range to fly all the way across the Atlantic so couldn’t protect them throughout the entire crossing. Thus, the ships had to navigate through the so-called “Black Pit,” where radar was iffy and German U-boats lurked, waiting to attack. More than 100 convoy battles took place and there were over 1,000 single-ship encounters during the course of the war. 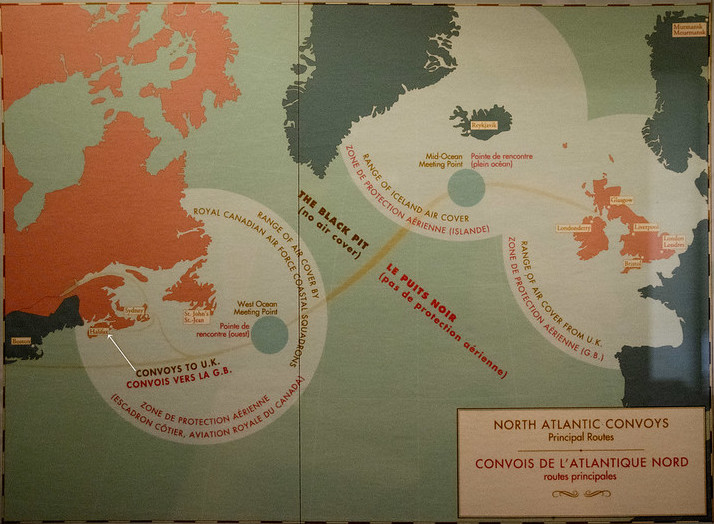 Supply convoys from the U.S. and Canada on the way to Europe and Russia had to make it through the “Black Pit” zone of the mid-Atlantic where planes couldn’t reach and German U-boats lurked.

Full Steam Ahead … to a Good Night’s Sleep

But as dramatic as the historical convoy backstory is, oddly it works against Greyhound as a film because the attack on Hanks’s convoy is utterly predictable. And sure enough, it isn’t long into the film before the convoy finds itself surrounded and threatened by German U-boats.

That leads to lots of “Forget protocol, full steam ahead” and “Hard right, 30-degrees to starboard” action on the bridge as Hank’s character refuses to eat or sleep until he steers the convoy past the Black Pit and safely into range of Britain’s crack RAF pilots.

However, unlike the action in Captain Phillips where Hanks must deal face-to-face with a gang of volatile Somali pirates, the Germans are a faceless enemy. They can be heard taunting the Americans over the radio, which leads to lots of dialogue along the lines of “Change frequencies, change frequencies!” but very little more.

Spoiler alert — I kid you not — the film ends with Hanks heading to his quarters, saying a quick prayer and finally, finally … falling asleep.

Just a Guy Doing His Job

I feel sure that Greyhound wouldn’t have seemed like such a formulaic snooze if I had seen it on the big screen. I’m the first to admit that watching it on my laptop wasn’t very engaging. But of all the untold stories of courage during World War 2, what made Hanks choose to dramatize this fictional one?

And did scriptwriter Hanks really put the ship in jeopardy and race the ticking clock of making it safely to British airspace in service of nothing more than announcing he was “just doing his job” and earning a good night’s sleep?

Worth the Price But …

Did I feel robbed joining Apple TV+ and paying $4.99 to see Greyhound? Absolutely not. Do I think Hanks should bring on a seasoned co-writer for his next war movie script? Yes, I do!

Watch Tom Hanks discuss the Battle of the Atlantic in a featurette here: